Ben Emerson had never tried cannabis edibles before his birthday in April. He was raised in the Evangelical Presbyterian Church, which he left five years ago, and marijuana was “this thing that I had never really even thought that I was allowed to do,” he said.

“And then I’m like, ‘Wait, I can actually make up my own mind about this.’”

For his first foray, Mr. Emerson, 38, chose strawberry-flavored gummies, which he ordered online and picked up curbside at a dispensary near his home in Portland, Ore. “I’m not super-interested in smoking anything,” he said. “But as soon as I decided I wanted to try cannabis, I wanted to try something edible.”

Anxious times (say, a global pandemic) call for palliatives, like meditation, exercise or, in some cases, weed. More than a dozen states declared cannabis stores and medical marijuana dispensaries essential businesses, along with pharmacies and grocery stores, as the coronavirus sent millions of Americans home, with or without jobs.

Since March, the cannabis industry has seen an influx of new customers: Eaze, an online cannabis retailer, told The Associated Press that first-time purchases of cannabis were up more than 50 percent in early March. And as fear of inhaled products has risen — spurred partly by studies of “vaping illness” and exacerbated by respiratory risks associated with the coronavirus — many consumers have opted to enjoy cannabis in edible form.

When the Apothecarium, an upscale dispensary with locations in California and Nevada, moved from in-store retail to curbside pickup in March, Cali Manzello, the general manager of its San Francisco flagship, noticed a change in the size of orders.

“One of the first orders that printed out from the pickup machine said 25 packages of this gummy on it,” she said. “And we all kind of giggled. We were like, ‘Ooh boy, here it goes. It’s starting.’”

“It did not stop,” Ms. Manzello continued. “People were ordering, you know, up to the legal limit, which can be up to 80 edibles in some cases.” Ms. Manzello said that the company’s edible sales are up 16 percent, while vape sales have fallen by 19 percent.

“Edibles every year have been taking up a bigger slice of the pie,” said Alex Levine, an owner and joint C.E.O. of Green Dragon, a dispensary that operates 15 locations in Colorado. “Right before corona hit, edibles were basically at 20 percent of our sales. That was a huge increase over the past couple of years.” 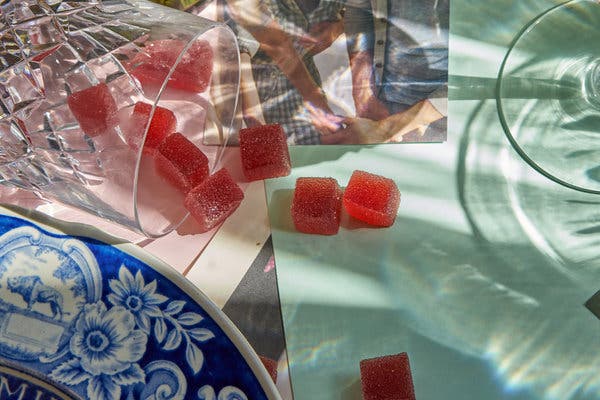 Vince Ning, the founder and C.E.O. of Nabis, a wholesale cannabis distributor in California, said that, as a possible result of “health-conscious” consumerism, his company has also seen an increase in sales of edibles.

“I think cannabis in general is a pretty recession-proof good,” Mr. Ning said. “Much like alcohol,” whose sales also skyrocketed as people prepared to be holed up at home indefinitely.

Chris Beals, the C.E.O. of Weedmaps, an online directory for dispensaries, said that according to company data, overall sales of edibles in March were double those in February. He said it could be a result of increased cannabis consumption among habitual users but also “new consumers coming in, who were working from home, dealing with the stresses of Covid.”

In the close quarters of quarantine, being stuck with roommates or family for an extended period of time, consumers may not want to smoke or vape. “When people are working at home or they’re around children or family, edibles are just more discreet,” Mr. Beals said.

Lauren Gockley, a classically trained chocolatier, is the director of edibles at Coda Signature, whose product line includes truffles and “fruit notes” (fancy weed gummies). She said consumers may be turning to edibles during the pandemic for other social reasons, including community.

“With the pandemic, there’s not that same sharing of cannabis the way there used to be,” she said. “There’s the phrase ‘puff, puff, pass,’ and now it’s ‘puff, puff, don’t pass.’”

In April, Mr. Levine said that Green Dragon saw sales of edibles dip. He chalked that up to customers buying flowers, the smokable part of the plant (commonly called “bud”), which they could use to make their own edibles.

“People didn’t know how long this was going to last. ‘Is cannabis going to be unavailable for months?’ So people bought flowers,” Mr. Levine said. “Flower is always the best value. It’s like buying the raw ingredients, if you will. It’s always cheaper to buy the flour and stuff to make cookies than buying the prepared cookies.”

Tee Franklin, a comic book writer and novelist in New Jersey, makes edibles at home and often uses cannabis oil in her cooking. “Oh, baby, I make everything,” she said. “Every single thing you can think of, I have made within reason.”

That includes “an entire soul food dinner,” which she cooked for herself and her 80-year-old mother: ribs with homemade cannabis-infused barbecue sauce, mac and cheese made with cannabis butter, and baked beans and collard greens cooked with cannabis sugar.

Ms. Franklin, who is in her mid-40s, received a medical marijuana card (another item in high demand these days) in December, after seven years of living with a disability caused by a car accident. It took her a month to save up enough money to make a purchase. When she first tried it, she said, “My pain in five minutes went from a 9, 10 to a 6, 7. Those five minutes changed my entire life.”

Ms. Franklin still uses a walker, but she said she can move better and stand for longer because of the relief cannabis provides her. “I’m not as slow,” she said. “I’m not the Flash, but I got a little pep in my step, and that’s all from marijuana.”

“It helps with depression, anxiety, stress,” she said. “There is no way on God’s green Earth that I would be able to deal with the coronavirus and the protests of George Floyd and just me being a Black woman, period, there’s no way.”

Ms. Franklin said edibles are the most accessible form of marijuana for many people, but not for everyone.

Money can be a major barrier, especially since some 20 million Americans are out of work because of the pandemic. Mr. Levine noted that at one of the Green Dragon storefronts where he was recently working, “half of the people coming in had no income. I’m sure it was even worse than that.”

The price of edibles can vary based on the state — and the amount of THC — but with a package of 10 gummies with 100 milligrams per bag of THC selling for $20 in Colorado and $18 in California, the cost can be prohibitive for some people.

Mr. Emerson, in Portland, acknowledged that his own ability to afford and have access to legal cannabis, for recreation, was a privilege. “That’s not something that a lot of people have been able to do,” he said. “A lot of damage has been done particularly to Black communities, the communities of color, because of something like cannabis, which is pretty harmless.”

“Dispensaries are an essential business,” she said. “It’s a drug-dealing business that is owned majority by white. But the Black people who were doing the same thing are locked up. The brown folks, same thing, they’re locked up.”

The post You Know What Else Has Sold Well During the Pandemic? Weed Edibles appeared first on CBD Health and Wellness.